ClicBot robot can be assembled and programmed in different configurations to perform different tasks. the robot works as minimal  as its  “head”  module for face recognition or remote camera and can be expanded to a full functional quadruped robots or a racing car.

Snap your modules in different configuration, the robot has a camera with face recognition, sensors, and a funny appearance

ClicBot is an animation-inspired robot similar to what is Cozmo  and Vector .  KEYi Tech  followed in Anki’s footsteps by hiring a Pixar animator to create the single, cycloptic eye in the middle of its cylindrical head. And, indeed, it goes a way toward giving the funny appearance and personality.

Differently from Cozmo and Vector this robot is not meant to be an autonomous robot pet but be programmed easily using drag&drop “blocks”. It’s  also true that this robot can be perfect platform if you wish to write your own programming code for your personal assistant.

NEXT: Check other new robots of CES 2020 or Build your own robot kitty 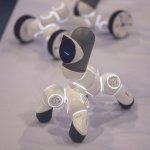 Will the robots take our jobs?