Plen Cube is one of the project we follow the most, with its minimalist design, cute animations and the wide range of functionality this robot got our attention for quite some time!

PlenRobotics has in their portfolio already two models and experience : Plen2 and Plen Mini, those two robots are opensource and popular as robotic platform & hobbyist.

Plen Cube is the first company’s project to shift from a consumer focus to more business oriented robot. 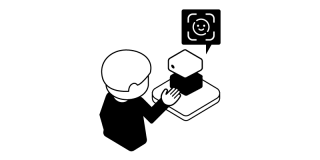 The robot is currently in use in various Japanese business, restaurants and help desks:  its tasks is to check temperature of employees, verify Access ID via face recognition, open/lock doors, make touch-less payments, give information via dialogue engine, activate lights and trigger IOT events

Advertised as “hand free camera” the robot was first announced in the PlenCube Kickstarter in 2017, The company then moved rapidly to build and showcase their first prototypes version in various robot events.

Think of PLEN Cube as your right-hand man (in robot form). We’ve packed a lot into this playful 3-inch powerhouse: a powerful processor, Full-HD camera, display, microphone array and speakers, along with cutting-edge software in facial recognition, speech recognition, and more.

From Prototype to Mass Production

As it often happens between prototype and mass production there are hidden costs and delays that can impact substantially the product and its functionality.

Plen Cube had to be redesigned several times to change the internal components ( including the main board) for more viable versions . The upper touch screen was removed in order to simplify the design in favour of on vocal commands, also it had to be tested for safety certification in order to be able to be exported overseas . To amplify the delay the production stopped due the Covid19 virus and the shipments has been blocked for quite some months.

Changes also brought benefits  : the robot can now be easily expanded with a thermal scanner and external sensors, and software wise it can now connect to a wide range of services. Finally PlenCube shipment is now resumed .

Yandex Delivery Robot is out in Moscow
Robots assistants to help passengers in the Istanbul’s new Airport
HOW ABOUT A ?? Interview with Pepper Robot
Pepper Robot join staff in several coffees and restaurant
Pizza Maker Robot never ceases to amaze us
Dishwashing Robot for Restaurants
XR-1 robotic girl assistant has fluid movements like us
The Rise ( and the fall ) of Delivery Robots