Home / robotic arm / This Robotic Extension can smash the walls

Supernumerary robotic arm is a robotic extension that enable humans to things that would be impossible : like having 3 prehensile arms, super strength or hold a beer while dancing!

Empowering the user:  lightweight robotic arms are attached via straps to the centre of the body. In the current implementation the robotic arm is remote controlled by an operator and uses hydraulic actuators for movement.

Canadian Researcher, lead by Catherine Véronneau,  are working in partnership with Exonetik for developing lightweight wearable robots such as this concept. 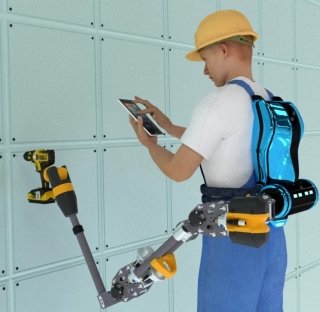 The researchers suggest that adding some sensors could allow the arm to do things like pick vegetables next to the user, as well as do more collaborative tasks, like providing tool assistance.

It could act as a co-worker, either directly increasing productivity by performing the same task as the user in parallel.

Check also : Enhanced humans may use a robotic tail for balance and A robotic exoskeleton to walk again