Stargate robot  is a set of robotic arms capable of 3d metal printing. The robot is build by Relativity Space, a startup that wants to combine 3D metal printing and robots to build a full rockets.

The first version of the robot is about 15 feet tall and consists of three robotic arms. The arms weld metal, monitor the printer’s progress, and correct for defects. 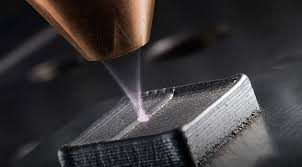 Stargate uses  custom-made aluminum alloy wire that melt using a plasma arc , the process is called FDM similar to the 3D commercial printers . The arm then deposits the molten metal in thin layers following patterns programmed in the machine’s software.

The Relativity Stargate robot printer will manufacture about 95 percent of the  first rocket, named Terran-1. The only parts that won’t be printed are the electronics, cables, and a handful of moving parts and rubber gaskets.

To make a rocket 3D-printable, the company designed their custom rocket design. As a result, Terran-1 will have 100 times fewer parts than a comparable rocket. Its Aeon engine, for instance, consists of just 100 parts whereas a typical liquid-fueled rocket would have thousands.

Relativity Stargate Robot printer expect to build the rocket from raw materials to the launch pad in just 60 days.

Terran-1 will stand about 100 feet tall, and be capable of delivering satellites weighing up to 2,800 pounds to low Earth orbit, similar to the competitor SpaceX’s Falcon 9 rocket.

NEXT : Those two robotic bartenders are super fast or build your robotic arm using LOBOT !

Robot chef arms for your kitchen
RoboCut carves objects from foam like a 3D printer
A robot for your business - CRUZR
This robot carves pumpkins for Halloween 🎃
This robot do a crappy job - An Autonomous Dog Poop Robot
Built and simulate your production line using DOBOT robotic arms
This week's robot news - acrobats , cheetah and tons of robot dogs!
Robot Barber - get an haircut during quarantine