Otto DIY is more than a robot: you will learn how robots works, you will build and code your own Otto and his personality !The robot  is completely open source, Arduino compatible, 3D printable, and with a social impact mission to create an inclusive environment for all kids.

learning the logical connection between code and action, and by assembling it they understand how its components, and electronics work.

In short, it is the ideal companion for developing STEAM skills: by building it, children exercise mathematical thinking, reinforce their technological and physical knowledge and enhance abilities such as problem solving and creativity.

Receive a 10%  on all OTTODIY official kits 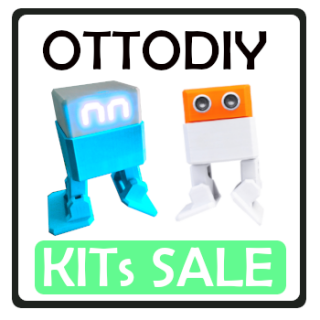 Use the promo code : OTTOMALTA2E8X

We had the pleasure to interview Jason Snow, a very active member of the community and designer of his Otto design called “OTTO Arms”:

Q) Did you use a kit of your build your own?

Jason : Designed and programmed myself

Q) What was the most difficult part to assemble?

Jason : The most difficult part is getting everything to fit in such a small space

Jason : The feature that would be great to add would be a voice

Q) What is your favorite robot? Do you own/built any other robot at home?

Jason : I have built several robots, the best one is ROBOCHICKEN which myself and two work colleagues built to compete in 4 series of the popular UK TV series Robotwars.